I just wanted to give people a brief update. I drove up from Las Cruces on Friday and for the first time in about a month was able to drive up through Silver City and Luna. The area south of Luna is untouched. Most of the fire seems to have gone to the north of the town. The fire jumped US 180 between Luna and the AZ border. As I drove through that section there were still plenty of smoking stumps.

Alpine AZ was in pretty good shape. The hills surrounding the town were burned rather badly, but the town itself is fine. There was still smoke rising from a number of hotspots both around Alpine and Nutrioso this weekend.

Most of the action on the fire is now on the southern end of the Blue. They lifted the evacuation order for residents of the Blue. I talked with Don Hoffman yesterday and he and Janie are now back at their home. The house, garden etc. are all fine. There is still some fire activity within 3 miles of their home but so far nothing too threatening. I will be meeting up with Don later today expect he will have many great stories.

The fire is now at almost 540,000 acres and is about 80% contained. The Forest is still closed so I can’t give you much firsthand accounts of what things look like on the ground. I did find an interesting aerial picture of the top of Escudilla. 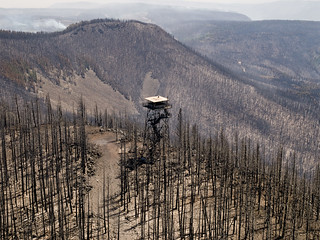 As you can see the top of the mountain is heavily burned. This confirms what we have been seeing from the base. The bench surrounding the peak got hit much less seriously. For a full set of pictures from the fire go to:

The first couple of screens are mostly of Secretary of Agriculture Salazar and U.S. Forest Service Chief Tidwell, but on the second page you start to get some good pictures of the fire and firefighters.

Things here are in the mop-up stage. We have a steady stream of Forest Service people coming in our property evaluating soil conditions, patching up dozer lines, replanting dozer lines with rye grass, etc. We had a Forest Service hydrologist stop by yesterday and talking with him was sobering. The worst for us may yet come.

With the top of Escudilla so badly burned they are expecting record runoffs even with a relatively modest monsoon season. Along with the runoff will come all the debris that will clog stream channels. As the channels fill up, the extra water that will runoff from the burned areas will seek new channels. He estimated that our property was at risk of flooding from Hulsey Creek despite the creek bed being 15 ft. below our property level. Not what we wanted to hear when we have a 45’x 30’, 8’ deep hole in the middle of our property. As if on cue, this afternoon we saw the first monsoon thunderheads forming over Escudilla. No rain yet and we hope we have time to build some berms to divert water away from newly dug basement before they come. Tomorrow morning there will be a sand bag filling “party” at the new site of the Nutrioso firehouse so the community can start to prepare for the inevitable flooding.

We have started our own restoration work. Today we spent a couple of hours felling burned trees from our hillside. The idea is to drop them at angles so that when the rain comes the water flowing down the hillside will hit one, then another and have a maximum amount of time to absorb into the ground instead of flowing directly down the hill. Nature is also at work. The Ponderosa Pines that were only partially burned have been dropping their seed pods in hopes of reproducing themselves in the newly cleared ground.

The political battles over the fire continue. Below is a link to an article by George Wuerthner on what he sees are the causes of the fire. The replies show some of the more thoughtful exchanges on the topic. Much of the dispute is a lot less civil.

We are trying to get back on track with our building. We have a few minor alterations to the foundation forms to make this week. Hopefully we will do our first concrete pour just after the 4th of July holiday.

I will give you another update in a few days.